I was born in Cambridge in 1949 – my father was from Stornoway in the Western Isles and my mother from Grantchester – they met while serving in the Royal Navy during World War 11. Dad was a village policeman: thus it was that I grew up in the East Anglian countryside, a very different place then than now -I can recall cornfields strewn with wild flowers and clouds of butterflies, gone now due to intensive farming. The peace of the 1950s is also a thing of the past, with widespread car ownership and most villages now essentially dormitory suburbs. The family moved to Newmarket, then Girton and, in 1969, Cambridge proper, Taking over a house previously occupied by my grandparents.

I began painting seriously at school aged 16 -my earliest efforts were invented (though I also drew from life) but I soon realised that attempting to portray visible reality was far more compelling than anything I could make up. In 1968 I began a course at the Fine Art Department in Reading University, fondly imagining that I would be allowed – even encouraged – to develop along the path I had already chosen (or, rather, that had chosen me). No chance! The people who ran the place were hostile to anyone who wanted to paint from life, and did their best to discourage us. This was a severe blow to my confidence -1 changed course to Art History and slowly worked my way back to where I had been before, which took three years. I was encouraged by two fine (though very different) painters among the staff, John Wonnacott and Ray Atkins, who have remained friends ever since, as have my fellow refuseniks. 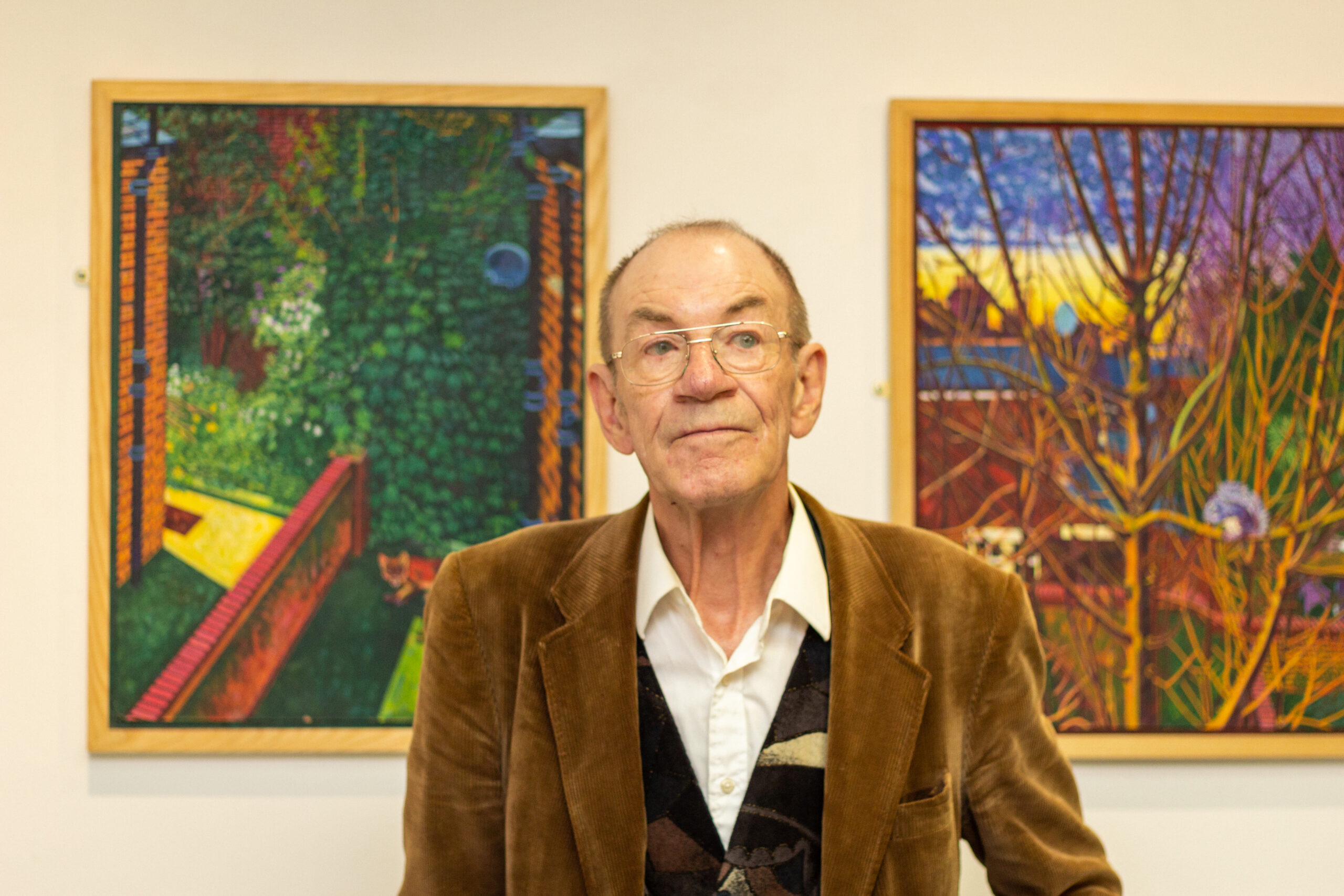 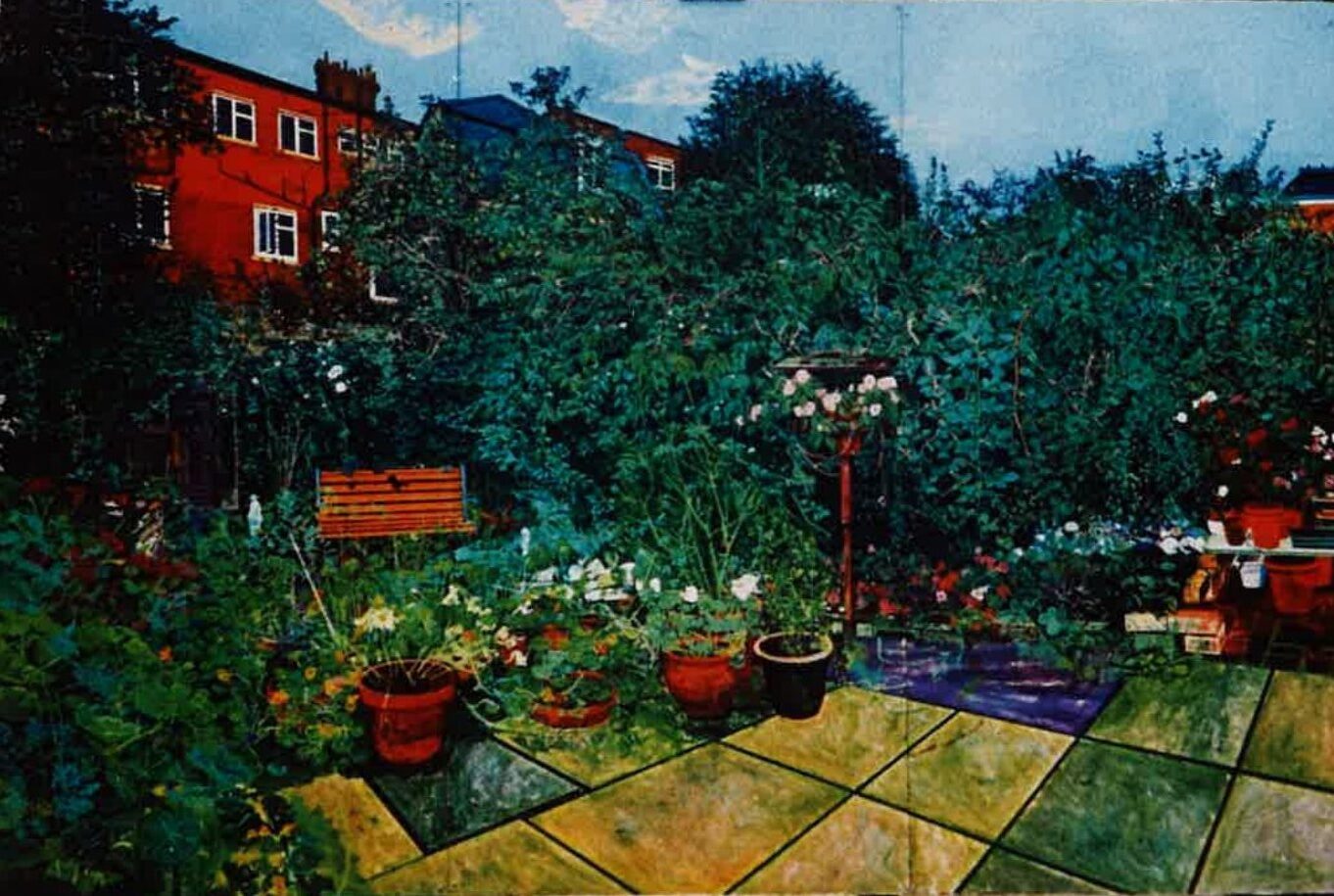 Getting my order of release from Reading gave me a boost, and I worked apace, also putting on four one-man shows, while supporting myself in a variety of jobs including bricklayer’s labourer and runner (auxiliary) in the Addenbrookes operating theatres. I even managed to fit in an overland trip to India. In 1979 I joined the Civil Service (DHSS) – if you can’t beat them, do the other thing.

Very few paintings from the Reading years survive: completing “Approach to Cambridge Station” I thought it so much of an advance that I destroyed most of my previous efforts. I still think that “Back garden at George Street with full moon” works fairly well, as also “Undergrowth” and “The Family”. “Castle Hill at twilight” was in the RA Summer show in 1975, receiving a favourable mention from the then Telegraph critic, Terence Mullaly. “The Mill Pond”, painted over three summers from a pub garden, is perhaps the most successful large painting of the decade.

For the first few years I was still living and working at home, with results visible in “Back garden in late summer” and “Mother by the window. I painted elsewhere, too, sometimes close at hand (“Histon Road cemetery”) and sometimes further afield, as in “The Johnson family” (Highbury). This was a time when a number of my friends had young families, and there are other group portraits.

In 1981 moved to my own flat, in a modern development by Grange Road – “Cockcroft Place in winter” depicts this. In 1984 I moved to London: I was already working in Stepney office and tried commuting for six months, but found this very tiring, and took a flat in the Queens Park Estate where I have lived ever since. The move gave me the opportunity to tackle fresh subjects – “Garden with young ash tree” is perhaps the best, but I think the Hampstead Heath series also has merit.

In 1992 I began a series of large paintings from the roof of the bus garage at Westbourne Park. “Trellick Tower and the Great Western Road” was the last to be completed (how I flattered that ugly brute of a building!) but I came to feel that the first two (“Transport for London” and “Farewell to London”) were unsatisfactory, and reworked them, at first on site and later, after a gentle hint from the engineering manager that I had been there quite long enough, in a hired studio and at home. I worked in Cambridge as well, the results being “The Tranah family” and “The Garden”.

My father died in 1998 after a long and debilitating illness; the parents had moved to Clacton, of all places, a decade earlier.

Some of the works from this period (“Red self-portrait” and “Yucca palm at night”) have rather a grim edge to them. Visiting my mother in her declining years was a sad business, and I was still recovering from the experience of having a police informer living in the downstairs flat (see portraits of him and his sons), with consequences including criminals on visiting terms, two burglaries, and death threats.

My mother died in 2004, closing a difficult chapter. In 2005 I took early retirement in 2005. The inheritance, and the lump sum would support me for a while, and the opportunity to say goodbye to a job I had never wanted to do, and paint full-time, was too good to miss. I was now free to travel, and worked in Henley-on-Thames (“Petra in Henley”) and southern France (“The empty courtyard”). 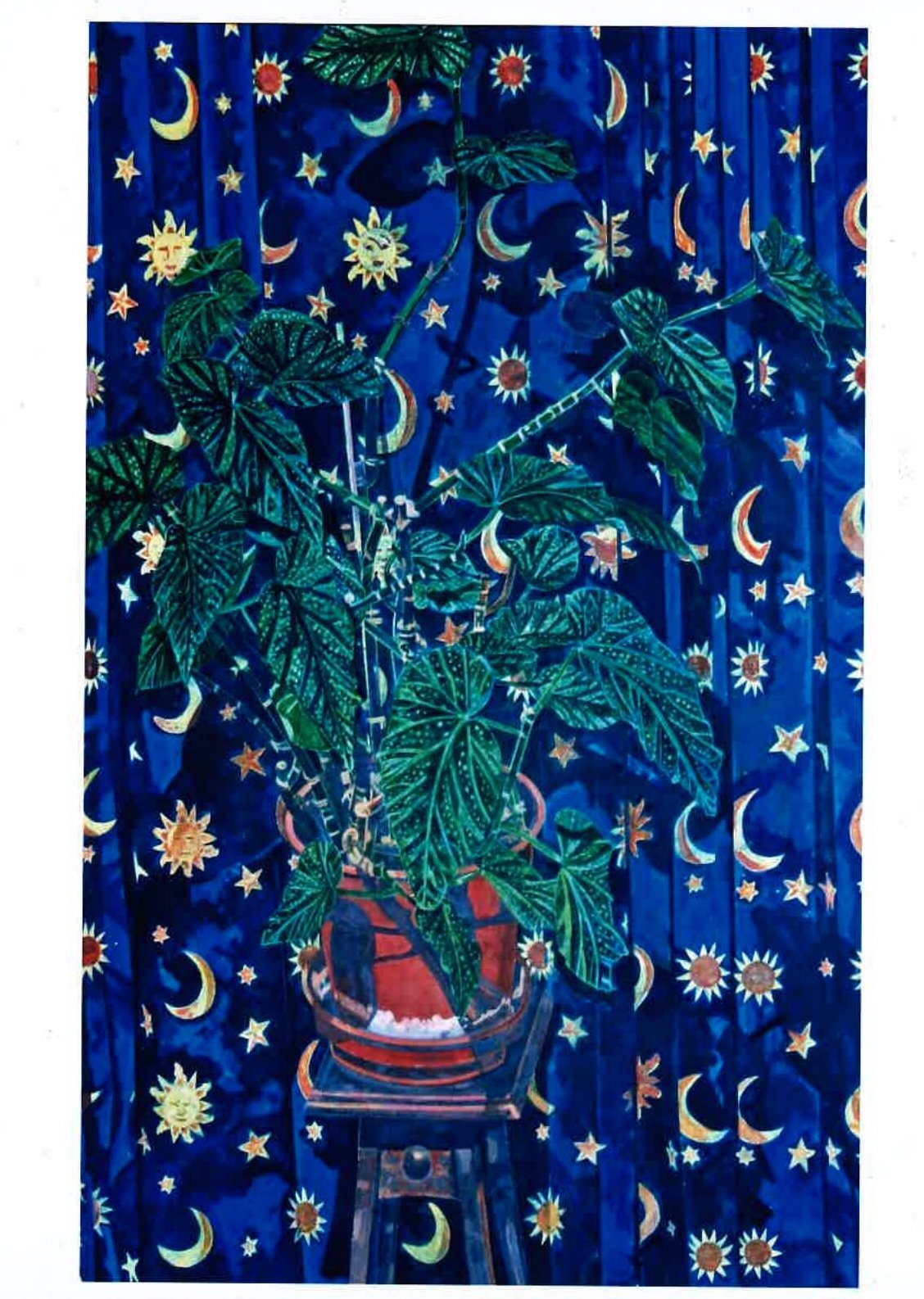 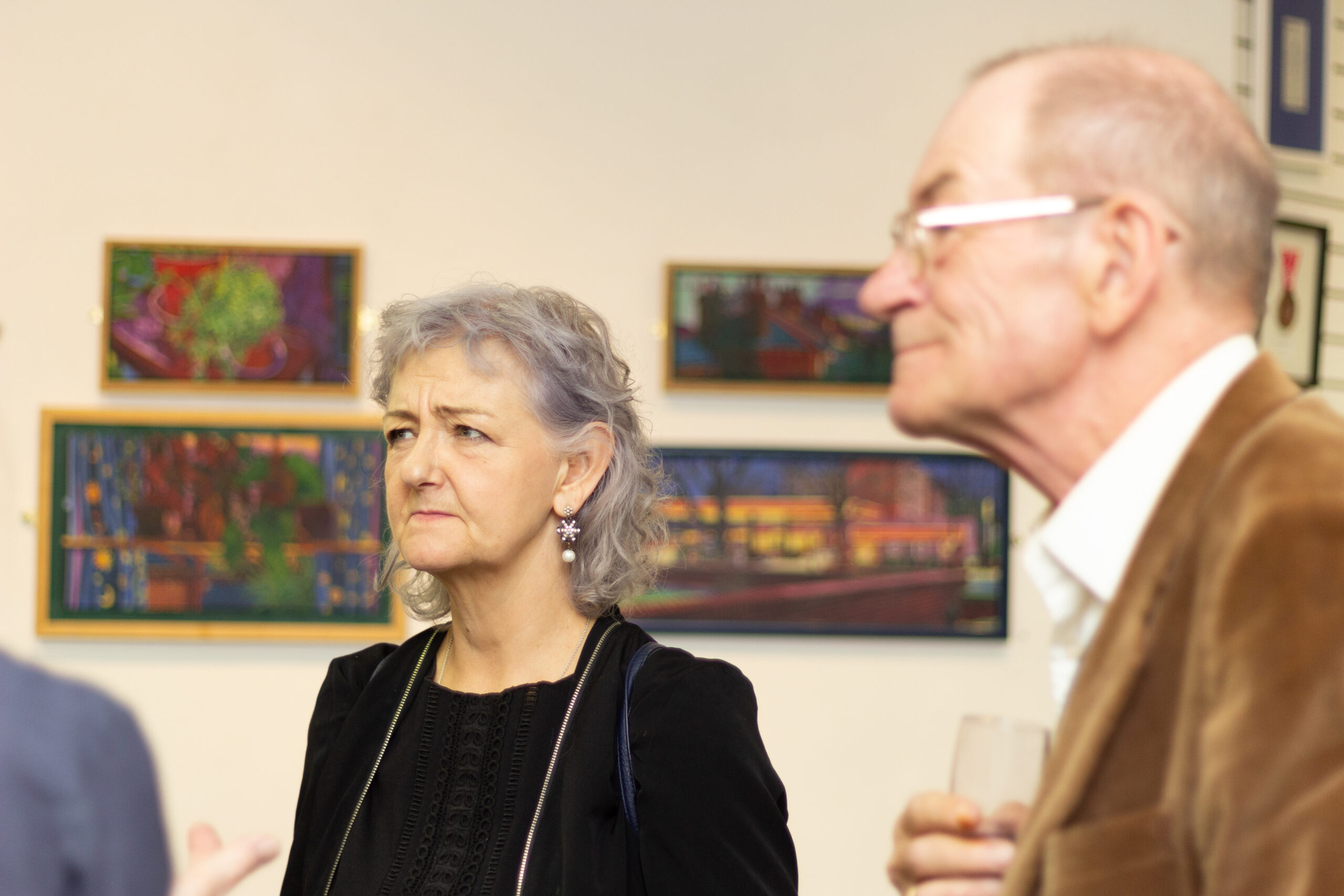 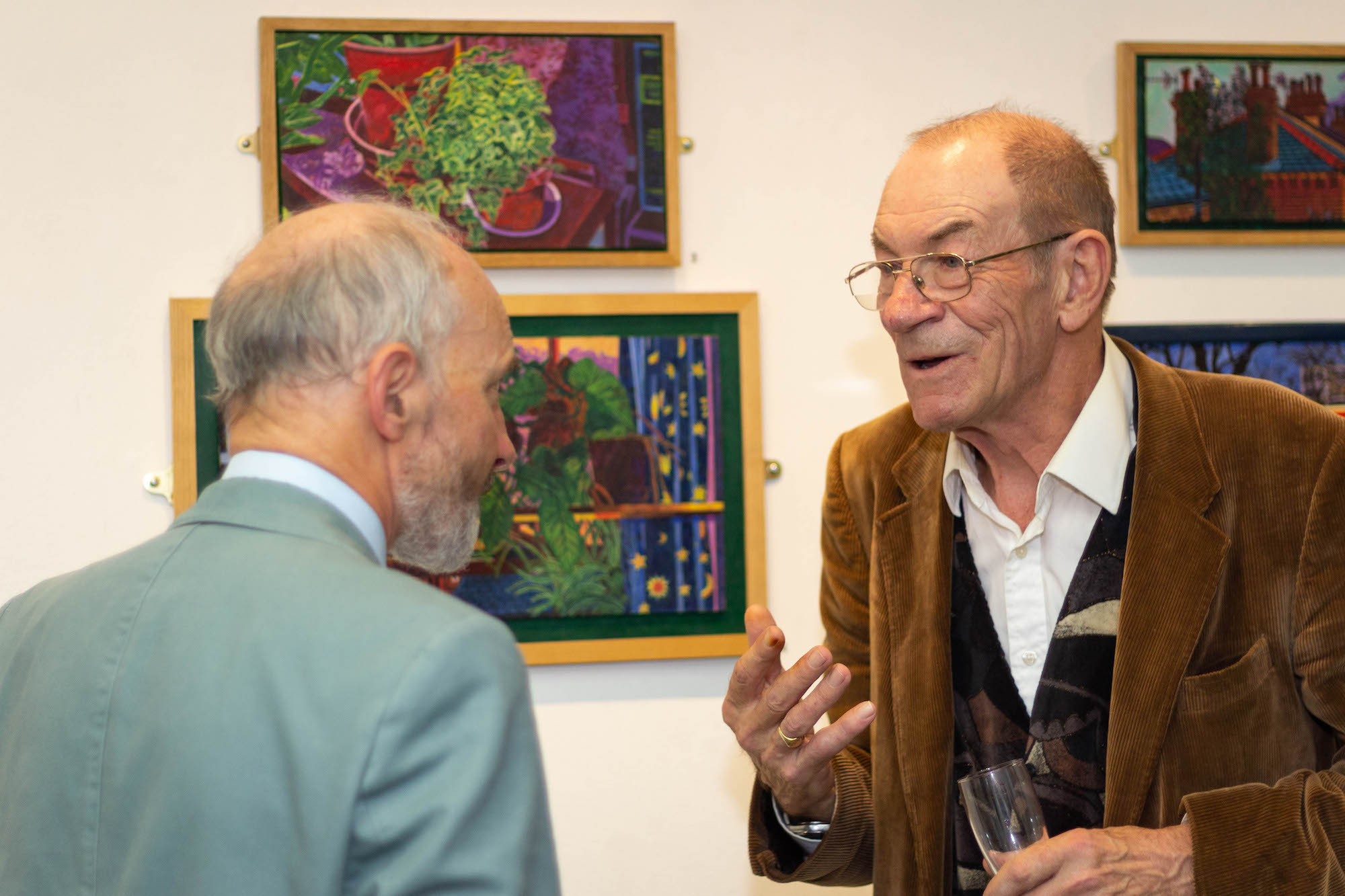 In 2010 came my first solo show for many years at the Grant Bradley Gallery in Bristol. Further painting holidays abroad followed, in the French Pyrenees (“Magic chestnut tree”, “Foxglove tree”, “Walnut tree house” and in Prague, Petra having returned to the city of her birth in 2010 (“St Clements church”, “Street corner” and “Prague at night”)

In 2013 I completed and self-published “The power of Robert Simpson” a very gifted composer who was also a personal friend , and whose music has been grievously neglected since his death. 2021 will be his birth centenary, and one hopes that this will bring a revival of interest.

During this decade I also made full use of material near to hand, including Kensal Green cemetery (“Grand Avenue” “Copper beech” and also Queens Park Gardens (“Street in winter”, “Herne the hunter”), practically next door to me, useful when recovering from a broken leg!

The major work from this period is “A bar at the Warrington Hotel”, painted over two and a half years, interrupted for six weeks while I got over a fall which cost me a fractured vertebra. It has since found a buyer, although he remains anonymous. In September 2019 came my first solo show in London, at the Graham Hunter Gallery, Baker Street – a well attended private view (including two old friends not seen for seventeen years, and a couple of sales – not bad.